What is Femoral Anteversion?

Also called hip anteversion, femoral anteversion refers to a forward (inward) rotation in the femur (thigh bone and knee) which connects to the pelvis to form the hip joint. Said differently, the knee is excessively twisted inward relative to the hip.  Many children are born with femoral anteversions that they eventually grow out of. In people who do not grow out of it, a mildly anteverted femoral head may cause no significant health problems.

An excessive anteversion of the femur, however, may overload the anterior (front) structures of the hip joint, including the labrum and joint capsule. When the foot is positioned facing directly forward, the femoral head may sublux (partially dislocate) from the socket of the hip joint, called the acetabulum. This torsional mal-alignment places abnormal stress on both the hip and knee joints often leading to pain and abnormal joint wear. 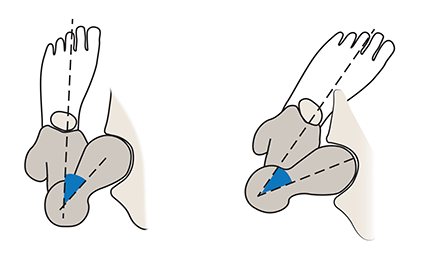 The exact cause is unknown, however, femoral anteversion is congenital (present since birth) and develops while a child is in the womb. It appears to be related to the position of the baby while growing in the uterus. Since it often runs in families, it is believed that some people are genetically predisposed to the condition. This type of torsional deformity can also occur after trauma. After a femur fracture, a torsional malunion can occur leading to the same type of problems mentioned above.

Signs and symptoms of femoral anteversion include:

Generally, the doctor will review the patient’s history, do a physical examination and observe the patient’s gait (manner of walking) to look for signs of in-toeing. The physician may also order X-rays or a CT scan to look for any deformity. However, in certain cases, femoral anteversion can be difficult to detect. This is especially true in cases where the hip anteversion is combined with a separate rotational bone deformity, such as external tibial torsion – an outward rotation of the tibia (shinbone). This type of complex case is called “Tetra-torsional Malalignment.”  It can be hard to diagnose because:

While many children grow out of their femoral anteversion conditions, excessive anteversion may require surgical correction, through a procedure known as a femoral osteotomy. This surgery involves cutting and realigning the femur.